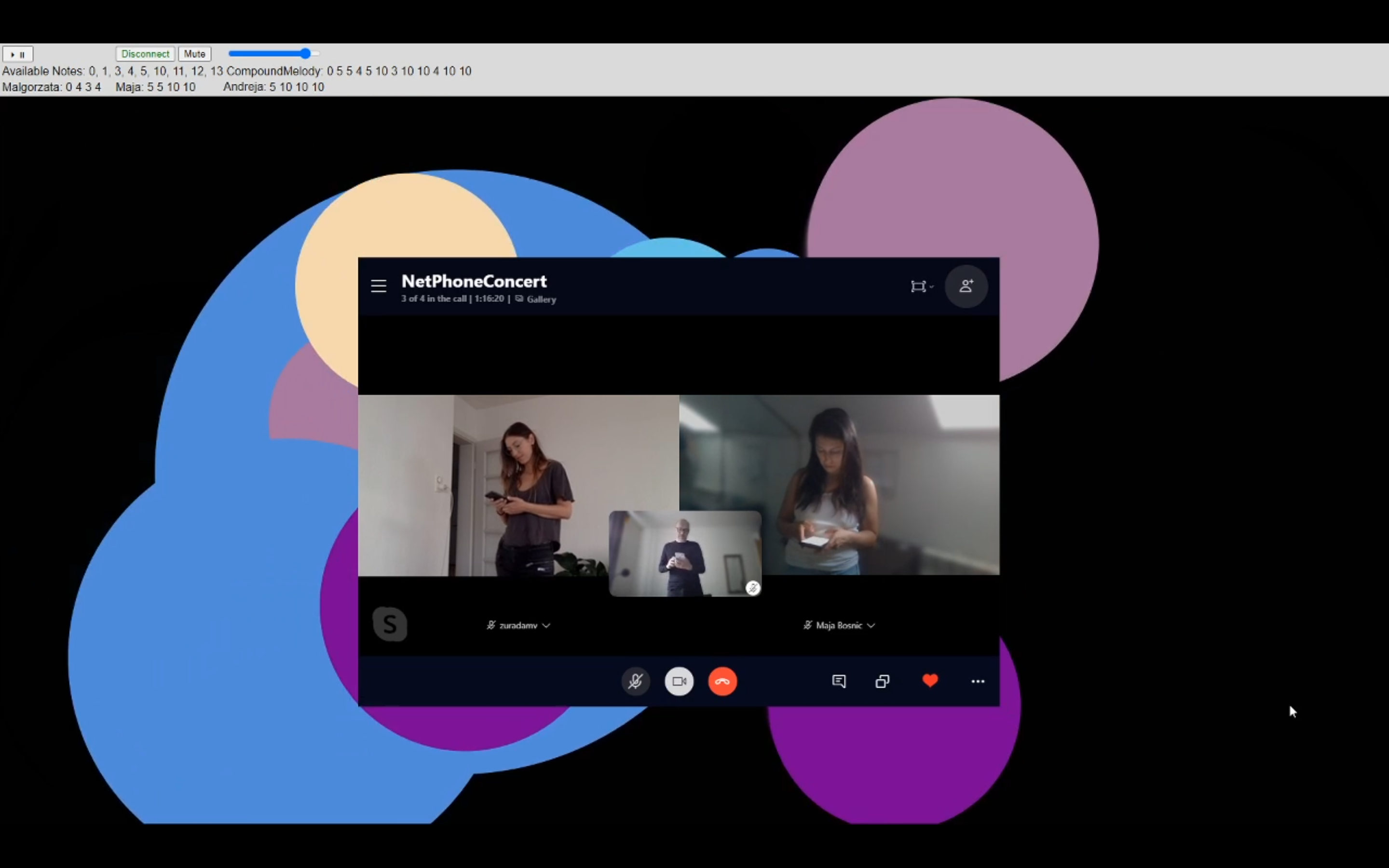 Concert for Smartphone Network is at the same time a music composition, a piece of distributed computer software and a collective improvisation practice. The work is for a networked smartphone ensemble where a custom made distributed software system combines the individual music lines of different performers into one music flow. The performers develop the music together and use the system to explore new ways to connect with each other through collective music making. The software synchronizes the individual performers’ inputs, mitigating delays over large distance networks, while the small size of the handheld devices leaves the body free to move. The work, composed and programmed by Andreja Andric, features fast and intense loops of synthesized sound, exploring repetition, variation and sound color in a natural (non-tempered) scale and low (1-bit) sound resolution.
The work has been mostly performed as a livestream where the performers play from three different countries: Denmark, Serbia and Switzerland. Members of the ensemble are: Andreja Andrić (DK/RS), Małgorzata Żurada (CH), Maja Bosnić (RS) and Marija Šumarac (RS).

Andreja Andrić (RS) (born 1973) is a Serbian composer and programmer, living in Aarhus in Denmark. He enjoys playful exploration of mathematical processes and chance and uses computer programming as key means of artistic expression. Pioneer of solo smartphone symphony as a music genre. His work has been performed in festivals such as World Music Days 2019 in Tallinn, Festival Futura in Crest, France (2018) and others. Holds a PhD in Music Informatics from the State University of Milan, Italy.

Małgorzata Żurada (PL) is an interdisciplinary artist, researcher and art writer currently based in Zurich. She develops her works from esoteric theories and rituals of past and present. The main areas of her research are visual languages connected to various belief systems and means of coding secret knowledge. Recipient of various grants, including the scholarship from Ministry of Culture and National Heritage of the Republic of Poland in 2016. Works mainly with sculptural installations, digital image, text and sound.

Maja Bosnić (RS) is a composer and performer from Belgrade. In her music, she re-questions and examines accustomed phenomena in the process of music making, exposes them to concepts of every-day life, then resets them in compositions that often include active audience participation. Maja obtained a PhD diploma in Music Composition at Goldsmiths University of London (UK). Her works have been performed in festivals, such as Impuls (Austria), CTM Festival, Darmstadt Summer Courses and many others.

Marija Šumarac (RS) is a Serbian sound designer, composer and trombonist. She holds a BA Diploma in Recording and Sound Design from University of Arts Belgrade. She performed with ensembles such as the Youth Philharmonic, New Spark Jazz Orchestra and many others. Her work in film, radio (Electronic Studio Radio Belgrade) and television influences her compositions and drives her interest in sound manipulation. She has presented her work internationally at festivals and venues such as Prague Quadrennial, Ars Electronica and UCLA ArtSci Center.