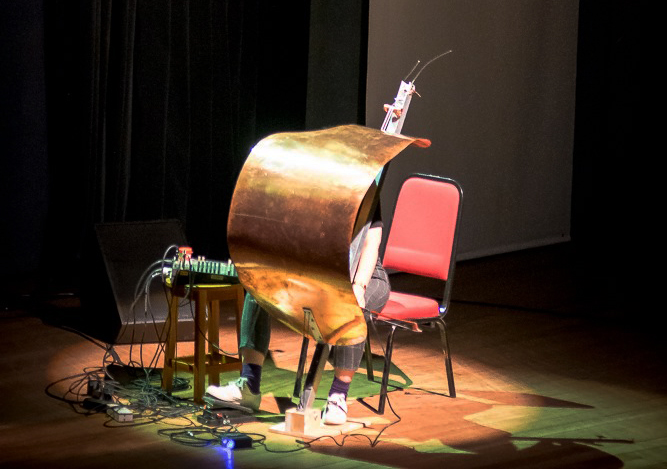 AFTER ITS PREMIERE, YOU CAN FIND THIS CONTENT ON PERFORMANCES CATEGORY

Self-Built Instrument project is focused on sound performance with an experimental instrument which is composed of strings and metallic sound box, producing overtones, harmonics and feed- back. It is capable to play with different sound colours : Resonances by cooper, bowing on strings, overtones and feedback. It is not a point to play a specific tone or to make a musical harmony, because the instrument is not able to perfectly control. Playing this Instrument is a challenge to your capacity, such as gestures and sonic phenomenon following sense and space. It is composed of circulation of swerving sound and embrace internal and external sound in space. The coupling of acoustic and electronic resonances in a performable instrument that has an almost sculpture like quality is intriguing. The sounds range from complex and exquisite to banal and cliché, and therefore, keep the interest going.

Jiyun Park ( KP)
Jiyun Park is a sound artist based in Cologne. She was born in 1990 in South Korea. After her academic education in multimedia design at Hanyang University in South Korea, she deepened her engagement with media art at the Cologne Academy of Media Arts. There she developed a way of dealing with sound that is characterized by electronics, voice, as well as self-made instruments. Her strongly performative works are characterized by border crossings in terms of space and time. To this end, she also initiates collaborative performances, which often communicate using data or a human-sound interaction. She is active in the experimental music scene in the city of Cologne. In addition, she played her instrument at diverse festivals such as the NIME 2019 conference, Instrument Make Play festival in WORM in Rotterdam, the project space Tresor in Linz, and the FEMINALE DER MUSIK which is the digital festival by ZKM.