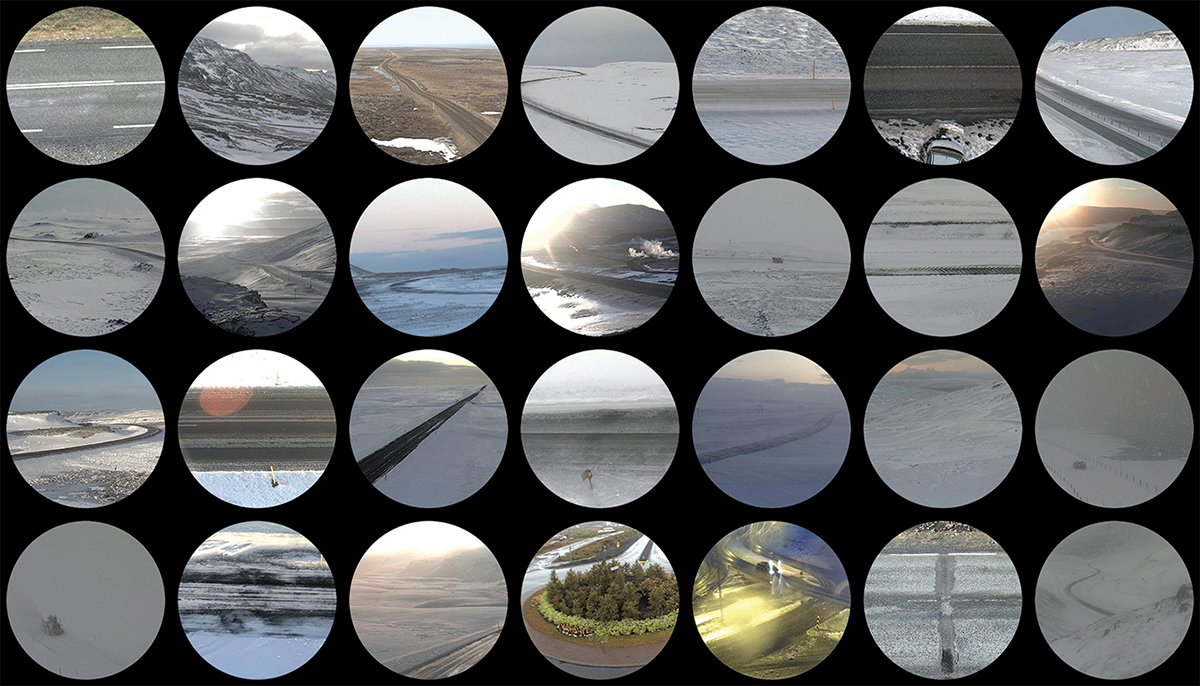 Spukhafte Fernwirkung involved manually collecting every photo uploaded to www.road.is—a website that uses a vast network of webcams to show the road and driving conditions of Iceland—each day for a year. I started collecting the images in early 2017 while undertaking a self-funded residency in Skagaströnd, Iceland and finished collecting them a year later. I missed trudging around Iceland in my snow boots, so engaging with the landscape remotely was a way for me to stay connected to the country. Moreover, whereas the digital is dominated by metaphors of space, with terms like cyberspace or virtual reality, I was interested in time, because time is (digitally-speaking) ignored, or viewed as a frustration—the time it once took a dial-up modem to connect to the Internet, or how long it takes to download something. Nonetheless, while digital in nature, I view the work as a hybrid process between a (long durational) plain air painting and (post-capture) computer processing. The webcams are located perpetually outside, constantly capturing the landscape(s)—before I, in turn, captured their capturing of the digital terrain (pun intended).

Kalium Graves
Kailum Graves is an artist and binary archivist critically obsessed with the Web and born-digital content. He is particularly interested in image-rich technologies and the way global media communication—a landscape controlled by a handful of multidimensional oligopolistic corporate-run networks—can be sampled, organized, and considered in new philosophical, sociological, and political terms. Nonetheless, while these issues are political and economic in nature, Kailum believes anti-capitalist art offers no real alternative to the economic and ideological discourses of multinational capitalism. In its place, he is interested in examining the politics of the image and the construction of truth. To do this, he uses the Internet, which has normalized the act of collecting and compiling information, to preserve and curate found images and raw material. The aim is to engage with the cultural space and aesthetics of the Internet—and the vast amount of digital information it contains—as a subject, material, and tool of artistic production.

AFTER ITS PREMIERE, YOU CAN FIND THIS CONTENT ON SPECIAL SCREENINGS CATEGORY