In Bots We Trust 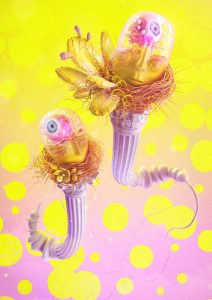 This work raises the difficult question of “interrelations” between technology and the human spirit. Jesus’ crown of thorns, is a symbol of spirituality, in which, like in a nest, every person is. Ionic columns are the symbol of civilization and its technical progress. Technology is beginning to invade the realms of consciousness, human relations, and even spirituality. They became not only influence these areas, traditionally being the human prerogative but to a large extent shape them as well. But technology without spirituality leads to an impasse. In order to keep control over the social activity, the phenomenon of Big Gods was created, vigilantly watching, who determined what is good and what is evil.

Which “Gods” will appear in our future and will they appear at all? Influencers, artificially created, bots flooding the digital space, is this really our new reality?

BY  Julia Shamsheieva (UA)
Julia Shamsheieva is a 3D and motion graphic artist from Odessa (Ukraine). Working in the field of visual communications, she was also developing as an audiovisual artist, gradually creating a personal aesthetic in the purview of video art, lighting installation, and projection mapping. Jul takes part in different light festivals all over the world. Her projection mapping works brought her grand-prize at Circle of Light (Moscow) and 1minute Projection Mapping (Japan) festivals, where she was also noted as the first female winner.
In 2022, Digital Image
0 Facebook Twitter Pinterest
Please Login
Please Register