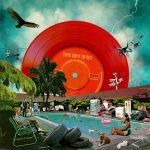 The Emperor wears no clothes. The 21st century defeats one by one, all of our convenient excuses and delusions. The heroes in this collage series live through the collapse of a post-war narrative of prosperity and security upon which they based their lives and self-definition. They are in a confused state of forced denial, as ecosystems and social contracts collapse around them. Perhaps they feel cheated and/or mutely complicit in things they should have reacted to earlier. Balancing between cynicism and profound tenderness, this work explores ageless existential subjects like the tragicomic position of humans in a kaleidoscopic reality so much bigger than themselves, the loss of meaning, everyday life as a joke through the relentless awareness of the cycle of life and death and the fact that we get ourselves and our opinions far too seriously, while having no clear idea about anything.

BY  Yiannis Roussakis (GR)
Yiannis Roussakis has been living and working around the world since 2004. He got his first analog camera at a flea market in Athens as a teenager in the 1980s. He studied physics and telecoms engineering, worked in big technology projects for a decade, then quit everything and started working full time as a photographer and visual artist. He has presented work in solo and collective shows in London, Athens, Budapest, Glasgow, Tokyo, Dubai and Abu Dhabi. He believes in dogs, coffee and companionship. He describes his collage aesthetic as "Carl Jung shaking daiquiris in space."
In 2022, Digital Image
0 Facebook Twitter Pinterest
Please Login
Please Register