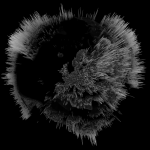 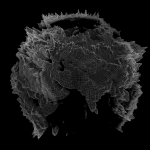 The Carbon Chronicles maps from the industrial revolution to the present day the regions contributing most to the climate crisis, which can be traced through the stalagmite growths representing CO2 emissions growing out from the different countries. Beginning with the UK in the 1750s, emissions from coal start enveloping the planet, other regions soon follow. By the late 1800s through to the current period, growing industrial and extraction activity in the Global North is responsible for 92% of CO2 with 8% coming from the Global South. The spread of CO2 described in the animation mirrors the wider historic processes of power distribution visited on poorer countries and shows that the atmosphere is as contested a space as the territories beneath it. The Carbon Chronicles informs the need for equitable solutions to the climate crisis that are mindful of the historic consequences of carbon exploitation to ask: Who Owns the Air?

BY  Manifest Data Lab (UK)
The animation is produced by the Manifest Data Lab, a collective of artists and climate scientists exploring the evidential and social potential of climate change. Tom Corby/Gavin Baily/Jonathan Mackenzie (lead producers, animators and directors) Louise Sime The British Antarctic Survey. Other Manifest Data Lab collaborators: Giles Lane, Erin Dickson, George Roussos. The project is funded by the UK Arts and Humanities Research Council.
In 2021, Animation
0 Facebook Twitter Pinterest
Please Login
Please Register
We use cookies to ensure that we give you the best experience on our website. If you continue to use this site we will assume that you are happy with it.AcceptDeclineTerms & Conditions
You can revoke your consent any time using the revoke consent button.Revoke Cookies Consent