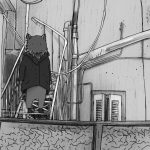 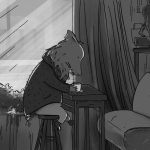 Clerk Blues is a song from IRINA, the debut album of METAMAN. This synthetic blues track sets the ground to the atmosphere of all his work. It is the apartment way of life, the daily commuting and the uninspiring everyday job that can suck the essence of life out of ones eyes. And our hero doesn’t fight back. Thoughts and mental images of a common clerk, surrendered to the routine of his life in the big city, meet repetitive synth sequences to create the urban picture of a person that is starting to doubt the fact that he is still alive. The video’s plot is inspired partly by the lyrics and the mood of Metaman’s music track, partly by the life of my boyfriend Theo, in his tiny downtown Athens apartment during the months of the Covid-19 quarantine. Choko, the dog appearing in the final shots, evokes an alter ego of the main character, a more wild and unbound version of himself.

BY  Eleni Tsampra (GR)
Eleni Tsampra was born in 1977. She is designing projects ranging from comics, illustrated books, character designs, storyboards to short animations. Since 2009, she has combined her professional career as an illustrator and animator with teaching in several universities: University of West Attica (Athens / Greece), TEI Department of Graphic Design (Athens / Greece), AKTO Middlesex University (Athens / Greece), Faculty of Architecture (Alghero / Italy), ΜΜU (Manchester Metropolitan University / UK).
In 2021, Animation
1 Facebook Twitter Pinterest
Please Login
Please Register
We use cookies to ensure that we give you the best experience on our website. If you continue to use this site we will assume that you are happy with it.AcceptDeclineTerms & Conditions
You can revoke your consent any time using the revoke consent button.Revoke Cookies Consent