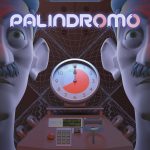 “Palindromo” is a short film that is symmetric in time and space. A scientist connects the present and the future through a time machine. Will he be able to communicate? In its two-minute runtime, “Palindromo” explores human themes such as ambition and taking shortcuts, borrowing its narrative devices from the science-fiction short stories of the golden age. Science itself is commented upon, as a collective achievement rather than an isolated effort, all among the present-day challenges of personal communication hindered by time-limited connections and contactless barriers.

BY  Paolo Amadini (UK)
Paolo Amadini is an animation student at Escape Studios in London, UK. As a science-fiction enthusiast with a background in engineering, he took the opportunity of his master thesis to work on this short film, which was produced mostly during lockdown in three and a half months.
In 2021, Animation
0 Facebook Twitter Pinterest
Please Login
Please Register
We use cookies to ensure that we give you the best experience on our website. If you continue to use this site we will assume that you are happy with it.AcceptDeclineTerms & Conditions
You can revoke your consent any time using the revoke consent button.Revoke Cookies Consent