The Girl Who Built A Rocket 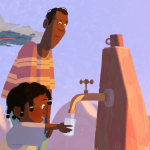 In February 2021, three space missions went into the Mars orbit, with the aim to look for water on the planet. These incredible ventures will lead us to answers and no doubt be of great value for the human race. However, while these ventures look for water on Mars, our mission is to reach everyone, everywhere with water here on Earth. A staggering 785 million people – that’s 1 in 10 who still don’t have access to clean water. This needs to change. This film was made to bring a new angle to the global water crisis. The Girl Who Built a Rocket tells the story of Fara, a young Madagascan girl who imagines building a spaceship to go to Mars and find water for her town, only to find that the help she needs is already on Earth.

BY  Neeraja Raj (UK)
Neeraja Raj is a director, writer and animator working in film, television, and commercials. Her acclaimed film Meow or Never was shortlisted for the Student BAFTA Awards, won the Women in Animation Best Film Award and Digicon6 Asia Silver Award in 2020. Her films have been screened and awarded in festivals including SIGGRAPH Asia, Sitges and more. She received her MA in Directing Animation from the National Film and Television School, UK (2020) and her B. Des. from the National Institute of Design, India (2017). She worked at The Walt Disney Company in 2016, developing an original IP, and as a stop-motion animator for GuardiansEvo, Canada in 2017. In 2018 and 2011, she was the first place winner in Emirates Airlines International Festival of Literature. Her latest short film The Girl Who Built a Rocket created for international NGO WaterAid is currently playing on the tv in the UK.
In 2021, Animation
0 Facebook Twitter Pinterest
Please Login
Please Register
We use cookies to ensure that we give you the best experience on our website. If you continue to use this site we will assume that you are happy with it.AcceptDeclineTerms & Conditions
You can revoke your consent any time using the revoke consent button.Revoke Cookies Consent